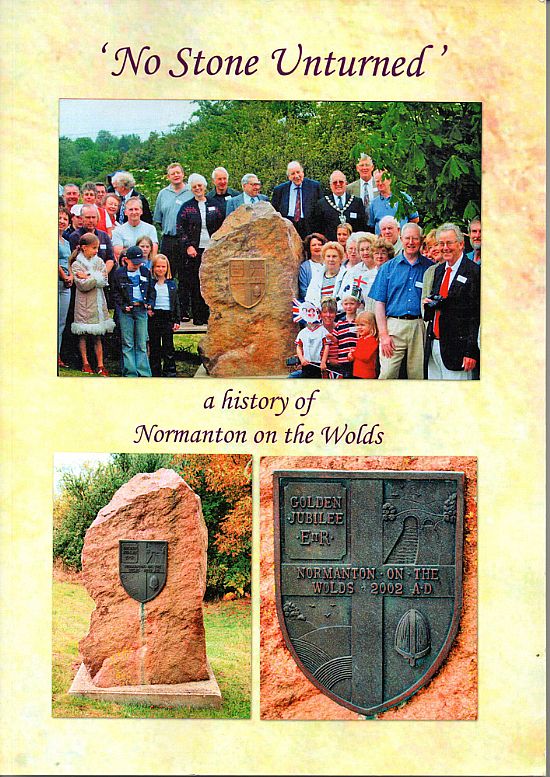 The book was published in time for the Diamond Jubilee of Her Majesty Queen Elizabeth in 2012, and each family in the village was presented with a free copy.

"No Stone Unturned" is still in print and you can buy a copy at Keyworth Library, from the Chairman or from the Parish Clerk; price £12.00.

The following extract is taken from the start of Chapter 1.

Between a third and a quarter of the whole of the county of Nottinghamshire lies south of the River Trent. This land has for the last 1000 years or so been divided up into three territorial divisions which are called ‘Wapentakes” or “Hundreds”. The term ‘Wapentake’ was only used in the counties of Yorkshire, Nottinghamshire, Derbyshire, Leicestershire, Lincolnshire and Rutland. This was the area of the Dane law, that was controlled by the Vikings. The word itself was derived from the custom of each vassal touching the spear of his over-lord at the periodical assembly, (from Old Norse vapnatak = weapon touching). The wapentakes south of the Trent and familiar to us today are Rushcliffe, Bingham and Newark. In the Domesday Book Rushcliffe is written as “Risclive”, so named because the usual meeting or assembly place was close to rushes. There is mention of a new Wapentake called the Plumtree Hundred in the year 1266 (1). This new Hundred would have included Plumtree, Normanton and Clipston and probably other nearby settlements as well. By the ninth year of the reign of Edward II (1307-1327) Plumtree Hundred seems to have been well established, as the Hundred of Rushcliff, which had been organised as a north and a south division, only returned half a Wapentake (2). Plumtree Hundred is recorded in 1310 and 1330 (3) but at some time unknown, the term disappeared from use.

The name of the village

Of the eleven “Normantons” in the UK nine are found in the East Midlands. The name “Normanton” would seem to be easily explained as a straight derivation; the town of the Normans. In fact the name probably pre-dates the Norman invasion of 1066 by over a hundred years, when the six counties constituting the area ruled by the Danelaw had been settled. The first Viking raid on the British shore was the attack on Lindisfarne in 793, although Vikings had already began to settle on some of the Scottish islands. Initially the Vikings originated from Norway but as gradual settlement ensued, the Danes, also known as the Black Vikings, joined in the pillaging. In 865 raiding for loot changed to attacks for conquest and settlement. The first use of “Normanton” as a village or parish name was in 956 when “Normanton by Southwell” appears in the written record. “Normanton” equates to the ‘village of the Norwegians or Norsemen’. The Normans from Normandy in France, literally the Northmen, were also of Danish ancestry. The term “Normanton Grange” is thought to have meant ‘the farm of the Norsemen’.