An information film that provides advice on the steps to take to keep safe in the event of a firearms or weapons attack has been released to the public today by National Counter Terrorism Policing.

Recent events around the world remind us all of the terrorist threat we face, which in the UK is considered as ‘SEVERE’, meaning an attack is highly likely. Police and security agencies are working tirelessly to protect the public but it is also important that communities remain vigilant and aware of how to protect themselves if the need arises.

The four minute film, Stay Safe: Firearms and Weapons Attack sets out three key steps for keeping safe. The film is accompanied by an online information leaflet. These are available via the following web page: Weapon Attacks Stay Safe.

The film and leaflet advise that if you are caught up in an incident to ‘run, hide and tell’ - guidance which can be applied to many places and situations. 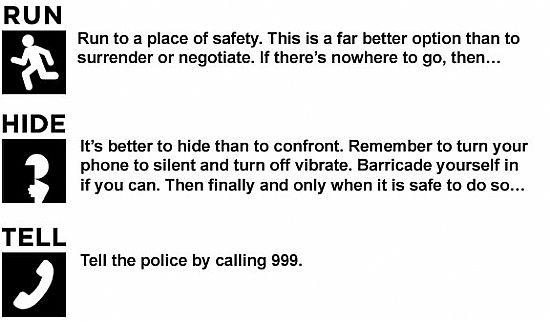